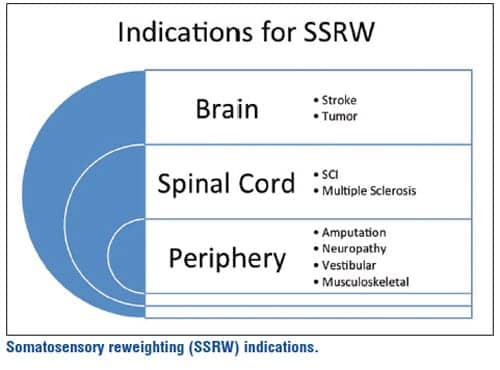 Somatosensory reweighting can be a valuable component in the rehabilitation of patients affected by vestibular impairments.

“Ground control to Major Tom,” an oft-repeated line in the famous song by David Bowie, is how we might think of this online “mission control” operation that our brain undergoes when processing information from all of our control panels.

While this may be a simplistic representation of the interplay among peripheral receptors, musculoskeletal capacities, and the psychology of our past experiences, the brain does oversee the dynamic operations of motor control. As such, our brains process and reconfigure the equations that lead to the most efficient movement possible in response to a change, or in forward-planning.

In neurologic rehabilitation we work with clients who have sustained injury (stroke, spinal cord injury, traumatic brain injury) or those who have another lesion to the system (neuropathy, vestibular labyrinthitis, multiple sclerosis). People rehabilitating from these conditions often have established a means by which they have adjusted the equations of processing incoming sensory information (visual, somatosensory—either tactile or kinesthetic, vestibular). However, the nervous system’s new strategy may not be the most efficient means by which to weight (place importance on) each relative sensory attribute, as suggested by Nashner’s early work on postural control.1 As such, we often help people reorganize this equation with a process known as somatosensory reweighting (SSRW).

Perhaps Haran and Keshner describe the physiology behind SSRW best in this excerpt taken from their case study: “Posture and balance are controlled by the vestibular, visual, and somatosensory systems, and the emergent motor outcome has been described as a ‘weighted sum’ of all sensory cues. The sensory weighting hypothesis suggests that each sensory channel is multiplied by some weight and then the weighted variables are summed to produce a response modulated to the relevancy of the incoming afferents. … when one sensory cue is absent or inappropriate, other more reliable cues become more heavily weighted. [And], through adaptation to this dysfunction, the CNS will weight the remaining inputs more heavily and rely on those signals to generate motor responses.”2

SSRW has multiple applications in development of interventions and can be used with a variety of diagnostic populations. The common impairments for patients that benefit from SSRW are 1) diminished use of SS feedback and 2) over-reliance on visual feedback—regardless of the diagnosis. These impairments are most easily identified by increased postural sway on conditions two and three of SOT or condition two of mCTSIB. The miniBESTest is a novel test easily administered that assesses four domains including sensory orientation, and is also helpful in identifying somatosensory impairments.3 Other basic bedside examinations to test SS feedback use can be as simple as vibration testing with a tuning fork, postural sway observation in single-limb stance with eyes closed, or the subjective report of imbalance while walking in the dark. SSRW can be used as both a compensatory and adaptive exercise—each of which is dependent on multiple factors, including, but not limited to, impairments, lesion site, and intact CNS.

SSRW can be applied to patients who are affected by vestibular dysfunction and who complain about symptoms of rocking, motion sensitivity, or visually provoked symptoms due to complex visual environments.4-8 One aspect of SSRW includes emphasis on kinesthesia, in conditions where this sensation is intact for sensorimotor retraining (SMR). Often, SMR requires training out of functional context with subsequent reintegration to functional postures and contexts.

Vladimir Janda, MD, DSc, a Czech physiatrist and neurologist, initially described SMR and found subjects improved with a focus on three areas of muscle recruitment for postural stability: foot intrinsics, abdominal muscles, and deep neck flexors. It is this approach that is the basis for SSRW exercises described here.9 Typically, it is more effective to teach the muscular recruitment for SSRW exercises while the patient is supine on a plinth with verbal cueing to force their attention to the feedback of the recruiting muscles and the feeling of pressure from the plinth.9-11

The unique attributes of SSRW include a progression that would have the clinician reweight the use of kinesthesia, by either removing or altering visual afferents. Practical application might include full visual occlusion, which results in the somatosensory system as the primary feedback for position sense. Haran and Keshner’s 2008 case study, on a patient with bilateral vestibular hypofunction, suggests this approach (emphasis on kinesthesia) as well after successful postural reflex training in an environment with full visual occlusion.

The head can be supported with a deflated therapy ball to assist the patient in maintaining a neutral cervical spine as well as providing continuous pressure feedback when the patient slowly turns the head side to side. Continuing to verbally cue the patient to attend to the SS feedback rather than the vestibular symptoms teaches the patient to focus on their own body awareness instead of the symptoms of movement.10-13

The progression of this technique can move to sitting with back support or standing against a wall with the head supported using a deflated ball and applying various dynamic activities such as weight shifting or overhead reaching. Eventually, the goal is to move away from the solid surface and have the patient utilize the muscle recruitment in walking with head turning. It should be noted that over-recruitment of the postural muscles is to be avoided so that appropriate trunk rotation can occur.10

Clearly, SSRW rehabilitation should be carried out in functional and dynamic postures. Walking with head motion, eyes closed, or visual distraction (aberrant stimuli) can be done most safely on a treadmill that moves both forward and reverse, such as the Landice Rehabilitation Treadmill (pushing intensity) from Landice, headquartered in Randolph, NJ, or the RTM600 Rehabilitation Treadmill from Biodex Medical Systems, Shirley, NY, under the support of such harnesses as a LiteGait by the Tempe, Ariz-based company Mobility Research.

LiteGait is a gait training device that controls weight-bearing, posture, and balance over a treadmill or overground. LiteGait provides proper posture, reduces weight-bearing, is designed to eliminate concern for balance, and facilitates the training of coordinated lower-extremity movement. Another device that controls weight bearing in a harness-over-treadmill design is the Lokomat Pro offered by Norwell, Mass-based Hocoma.

SSRW for Clients with Vestibular Impairment

Many patients complain of vertigo, dizziness, or instability. Often, their terms can lead therapists incorrectly into suspecting or diagnosing vestibular impairment, when the primary problem is instability from neuropathy, for example. Clinicians can detect relative contribution of the vestibular system much easier with today’s technology. Vestibular contribution should be determined prior to designing a specific SSRW program for patients who complain of such symptoms.

Often, skilled clinicians can thoroughly examine the relative impairments in and contributions of the vestibular system among clients who present with imbalance. In complex cases, we benefit from technological advances such as the RealEyes camera and InView goggles from Chatham, Ill-based Micromedical Technologies, which are additional tools usable during vestibular testing. The RealEyes camera and InView goggles are engineered to allow observation and video recording of the patient’s eyes during the testing of a dizzy patient. RealEyes can also be used while performing vestibular rehabilitation therapy.

Overall, standard tests along with testing performed with different types of technology can help diagnose and assess potential vestibular issues before rehabilitation is conducted. Another tool Micromedical Technologies manufactures that can be used for this area of practice is the System 2000 Reclining Rotational Vestibular Chair, which allows a clinician to perform standard ocular-motor testing, visual vestibulo-ocular reflex, visual fixation, and velocity step tests. Other functions the System 2000 Reclining Chair is designed to provide include Dix-Hallpike and positional testing.

Patients with primary orthopedic impairment such as arthritis, multidirectional
instability, or microtrauma due to biomechanical impairment may benefit from SSRW to regain proprioceptive feedback for return to functional activities.15 This can easily be applied using some of the same techniques as for vestibular patients with the focus on postural control and vision occluded.

Beginning with weight-shifting activities with eyes closed and progressing to more advanced activities such as single-limb squat while picking up an object from the floor with eyes closed, will encourage the prioritization or weighting on the use of SS feedback.16 Hazime (2012) et al studied single-limb stance in adult males under various visual conditions and found that the role of vision increases in single-limb stance prior to rehab, but after SS rehabilitation vision had less of an effect on postural recovery.

In cases of visual dependency, such as the geriatric patient with frequent falling in the community, SSRW can be applied with postural stabilization in complex visual environments.17 Once these patients learn to recruit the musculature, complex fabrics or moving surrounds can be added to the functional activity. For example, a curtain moving around a patient who picks up an object from the floor or performs a weight-shift activity on a firm surface will force the CNS to utilize other sensory systems to resolve the conflict and maintain upright positioning.18

Consider the prevalence of such conditions as peripheral neuropathy due to diabetes, spinal stenosis, or B12 deficiency. Now, add the number of clients who have sustained a stroke, incomplete spinal cord injury, or are affected by a brain tumor or amputation. Finally, add the number of persons affected by MS or any other degenerative disease that impairs a sensory system. Now, one can have some understanding of the breadth for which SSRW can be applied.

How do we measure the outcome of improved somatosensory processing? Through balance measures provided by devices such as the Mobility Lab from the Oregon-based company APDM, therapists can effectively measure an individual’s relative sensory contributions in balance efforts. The Mobility Lab is designed to enable clinicians to collect, analyze, and store outcome measures. The patient wears sensors, performs a standardized test,
and then a report is automatically generated that includes measurements of postural sway, the upper and lower limbs, and
postural transitions.

Other dynamic posturography vendors that offer devices designed to provide this type of analysis include NeuroCom’s Equitest and Biodex’s BioSway. The EquiTest from NeuroCom, a division of Natus, Clackamas, Ore, is designed to provide objective assessment of balance control and postural stability, and the system provides assessment and retraining capabilities with visual biofeedback. The BioSway system, available from the New York-headquartered Biodex Medical Systems, is intended for portable balance and assessment training. The instrumented platform provides excellent utility during vestibular training, and the BioSway emphasizes specific movement patterns and encourages motor control and proprioception. PTP

Mike Studer, PT, MHS, NCS, CEEAA, CWT, CSST, is a co-owner of Northwest Rehabilitation Associates. He is a two-time national award winner for Clinician of the Year (Neurology section and Geriatric section).

10. Wilhelmsen K, Kvåle A. Examination and treatment of patients with unilateral vestibular damage, with focus on the musculoskeletal system: a case series. Phys Ther. 2014;94(7):1024-1033. 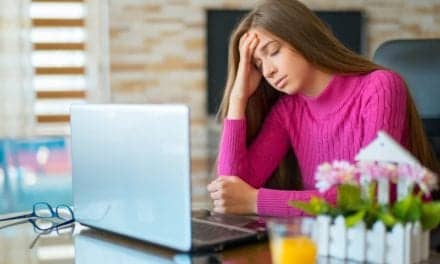 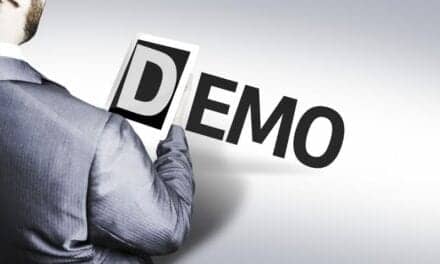